My little boy can barely see his 'Wilbur' from a standing position, let alone grab it and point it in a sensible direction whilst peeing. He's at the age where he refuses to use the toilet sitting down and would much prefer to approach it like a grown-up man. Of course he has the best intentions, but as I discovered at the weekend his aim needs substantial coaching. I mistakenly stood next to him and his pee shot up vertically like a geezer and straight onto my chin. Obviously, I have no experience with this as I don't have the equipment (apart from using a 'She-Wee' once at Glastonbury Festival). What I do know is that currently his 'ending' resembles a wet dog stepping out of a pond when it shakes vigorously and drenches everything in sight. So we're working on the finish and the placement of only one hand: "I don't think you need to support it with both hands just yet darling." I thought having pee in my face would stop now that he's out of nappies but alas, it isn't so.

I'll be visiting primary schools ready for next September over the next couple of months. It seems to have come along all too fast and I miss the little chubby baby-cheeks he used to have. I do think he'll be more than ready for school and is already writing his own name, recognising letters and numbers, starting to tell the time and is 'brilliant at maths' (his nursery's words). I look forward to sending him off to the next chapter and watching him grow and thrive and absorb knowledge.

My baby boy will soon be going to school AND I will be going back too! I feel elated, excited and enthusiastic. I also feel borderline insane.

As if I didn't have enough on my plate I've finally taken the plunge and I will be starting a part-time degree in Business Studies on the 5th October (subject to approval of funding)! Whilst my little one is in bed by 7.30pm most nights and is settled into a routine I can use the time I have in the evenings to do something constructive by gaining a few letters after my name. I'm hoping this degree will open doors and increase my earning potential. This in turn will give me a chance to afford to take my son abroad, pay for various lessons, activities and hobbies and even buy our own house one day.

Don't get me wrong, it's not as if I don't have enough excitement in my life already. I've had an amazing summer which involved being taken to the South of France by The Swede, I performed at Glastonbury festival as part of an Earth-protecting choir, I went to a Ferrari owners' picnic and I took my son to Cornwall and Devon to visit family. I want to go further and do more fun things so I'll have to work even harder.

These are exciting times ahead with lots of development for both my son and I. He will learn to pee straight and I'll learn to think straight. Come on World, we're ready for you!

Posted by Blink at 14:46 No comments: Links to this post 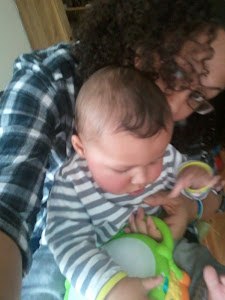